Wellbeing Workshop at Miyama Satoyama-sha: The Goodness of Fermented Foods 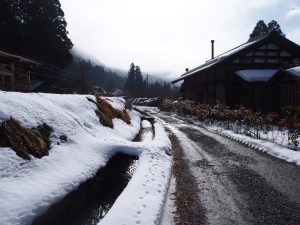 A soft January chill lingers in the air, and a thin white crust covers the earth: a new year has begun and our sixth workshop has rolled around. On the morning of the 28th of January our staff reunited with Dr. Ito and his students to prepare for today’s activities; Yoga and miso paste making.

For A Wholesome Body and Mind 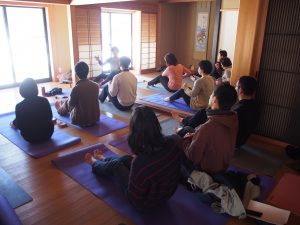 Around 10 o’clock the participants had all gathered and we kicked of the day with some yoga practice. After the customary introduction by Dr. Ito , and the health check, of course. One of the recurring themes in our workshops has been forest yoga, which is to say yoga preformed outdoors to better connect with nature. On the day of the workshop, however, the temperature had dropped and instead we chose to organize the yoga indoors.

Why put such focus on yoga, you may ask. Well, first and foremost, yoga has a lot of health benefits. It makes your body happy! You use muscle groups you wouldn’t normally, which loosens your muscles and helps you get rid of tension. Yoga also improves the blood-flow and breathing, while proving beneficial to the posture, too. Yet, Dr. Ito does remind us that even though yoga is an activity full off goodness one does profit from following a few simple guidelines.

Do not overdo yourself but abide by your own body’s limitations. Dress in loose clothes and remove accessories while preforming yoga. Furthermore, one should refrain from yoga up to half an hour before and after a bath, as well as when having a full stomach or when under the influence of alcohol. To get the full benefits, Dr. Ito further says, one should keep practicing yoga regularly for a long time. Creating a quiet and relaxing atmosphere (thus our forest yoga) is also of importance.

A Breath of Nature 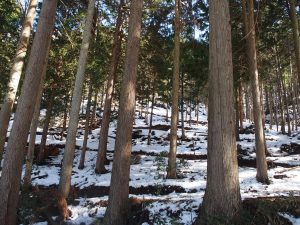 After the yoga our participants walked up the mountain road to our picturesque open yurt. It was time for some serious post-yoga meditation. To meditate is to take a break from the present, to shut down and focus purely on yourself and your innermost. Despite the cold, the meditation session was held outdoors, in the hope that nature would lend the meditators power and calm. And surely, the fresh air and snow clad surroundings seem to have helped.

Many find it hard to shut down and simply let go of their worries while meditating, and even when succeeding to clear the mind, they feel that their thoughts begin to drift and only after a short while. In such situations, nature meditation offers great potential. Nature helps one focus on the present, as one can actually hear the sounds and feel the air caress one’s skin. It alerts the mind to the flow of life, and also provides an easy target to refocus on if concentration is lost.

An Energy-boost Rich in Miso 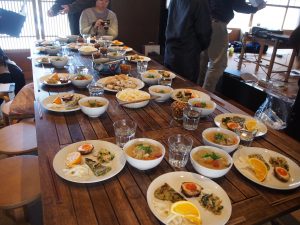 After meditating, our participants were naturally a bit chilled, and took the opportunity to warm themselves at the wood burning stoves while lunch was prepared. We enjoyed a colourful platter with a miso marinated egg, chijimi (a korean-style savoury pancake), a pickled salad, a sesame flavoured salad, and fresh oranges. In addition, we also served up ozoni (Japanese soup containing mochi and white miso paste), soyroasted soybeans as well as different flavours of mochi (japanese pounded rice cakes).

Having filled up on lunch we rapidly moved on to the next activity, miso making. We were lucky enough to have two expert misomakers with us. So, under their guidance our participants sat out to make a batch of yummy fermented bean paste.

How Is Miso Made? 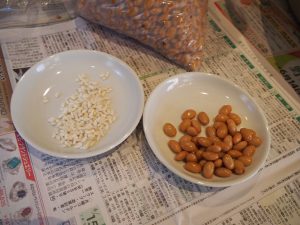 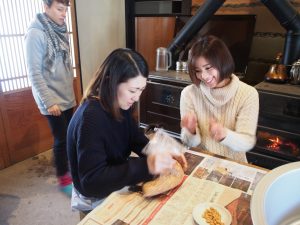 The soybeans are put into plastic bags for mashing. Kneed, kneed, kneed those beans till no lumps remain! 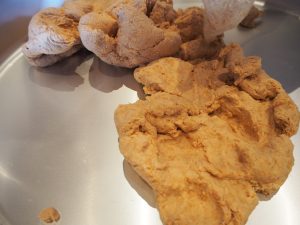 Pour the mashed beans and the koji into a large mixing bowl and work that mass. (Also, do not forget to add the salt into the koji, and stir well, before adding it to the beans). 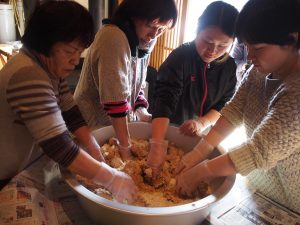 All it takes is some good old-fashioned elbow grease, so stick your hands (gloved, of course) right into it. 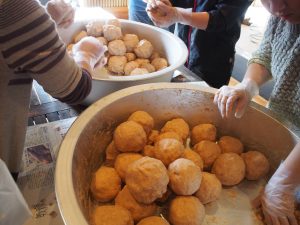 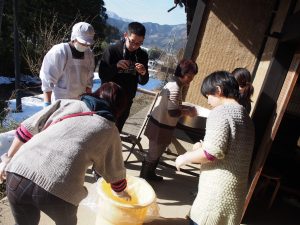 Slam dunk those ball into the container! This motion helps us get rid off all the extra air embedded inside the miso lumps. 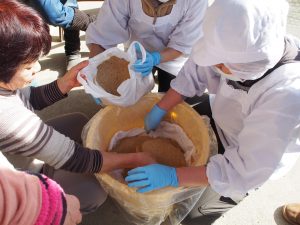 Sprinkle the bean-paste with nuka (rice-bran) and cover with a piece of alcohol soaked cloth. 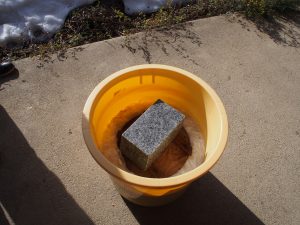 Put on a weight and place a paper (we used an old sack for rice, but newspaper works fine, too) on top of the container. 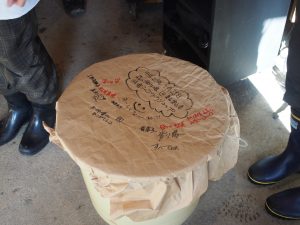 Sign and let ferment for one year in a cool, dark spot.

Not all mould is bad mould!

Fermenting food increases its shelf-life, it stays good for longer, furthermore fermentation also makes cooking easier, or eliminates it all together, which safes both time and natural resources. Food that has been fermented also posses a more deep and aromatic flavour, and the process eliminates anti-nutrients. Lastly, fermentation also cause higher levels of amino acids, vitamins and protein in foodstuff, and make them easier for our bodies to extract. So there, eat more fermented stuff! Not all mould is bad fo you 😉 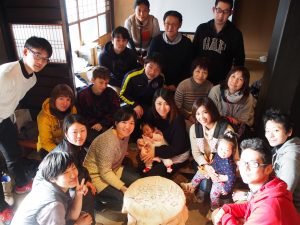 As per usual, the day ended with a closing health check, and participants were free to use the gomoen-bath, sauna and undergo additional acupuncture or moxibustion treatment. We want to thank everyone who participated and made the day memorable, with a special thanks to our misomaking experts! We hope to see you all next time, on the 25th of February, when we will be digging into some juicy deer-meat.