I am a 17-year-old high school student from the Czech Republic living in a small town called Zlín and I began to be interested in Japan and Japanese culture in general about a year ago.

The main impuls was that I was doing the Japanese martial art Kendo. Since Japan is a holy ground Kendo, many conversations with people from my Kendo club and my friends often involved a lot of questions not only about Japanese kendoka, but also about the true nature of the notorious “Land of the Rising Sun”. I was really curious about Japan, so I spent hours and hours reading articles and watching videos about japnase cousine, kendo, bussines, engineering and basically about everything at least partially related to Japan. I slowly began to unravel amazing difrences between Western countries and Japan. Now I had all these unbeliavable information about Japan, but it was so hard to imagine it being a reality. There was only one option for me, a visit to Japan.. I knew that I had to find out if everything I heard and read is true and taste, see, smell, experience and above all to learn as much as I could.

I knew that if I wanted to visit Japan would need to learn a little Japanese. Unfortunately I live in a very small town, and there were no Japanese language courses availible. I was really happy to learn about a Japanese woman living in the area with her family. I quickly got in touch with her and started taking basic Japanese lessons. At first it was very diffucult to understand the sentence structure of Japanese language. I was keep trying to compare it to English, German and even Czech. Later I found out that not only the Japanese language, but also many other things in culture are just diffrent and can not be compared to anything European. Many and many of my free evenings I spent by learning the nightmare of every linguist-kanji. A lot of times I asked myself if it’s really worth it to spend so much time and effort to learn something that I probably wont ever need in my career life. However, I endured not knowing if it was worth it.

The main problem with the trip to Japan was the budget. I can not say that I come from a poor family, but citizens of the Czech Republic earn much less money in comparison with people from countries such as America, Australia, Germany, and-of course Japan. I tried to look for a part-time job, but for each of these jobs, you need absolute knowledge of English language, and that I unfortunately do not have. In addition, there was a problem with a working visa, which is not easy to get to foreigners.

I almost thought that I wont be able to go through with the plan of trip to Japan, but then one of my friends mentioned that she was actually in Japan via a program called WWOOF. She sad that the only thing you will have to pay for are travel expenses but accommodation and meals are provided in return for helping in a place in which you live in. And if you stay in Japan for less than ninety days, you do not need a visa! It was perfect for me.

I quickly began searching for a suitable host.It was very difficult to choose from a wide range of hosts. But host number 21436 immediately caught my attention because it has been getting amazing reviews from previous wwoofers. I was also interested in the wide range of activities which this host offered. So I wrote a message asking wheter I could stay and help in Miyama for 3 weeks. A few days later I received a very positive and helpful message from Nakazano-san that I was welcome. I couldnt have been more pleased and i was already looking forward to staying in a small traditional Japanese village-Miyama.

Before coming to Japan, I really did not know what to expect. How will people behave towards me? What kind of work will I do? What are the Japanese really like? These were questions that i had in my mind, I hoped I would find mostly positive responses.

Four months after Nakazano sans message, I found myself standing in front of Kansai International Airport. I had to spend one night in Kyoto, because I did not manage to catch the last bus going to Miyama. I finally saw the streets many times displayed on internet websiites with my own eyes.There were unbelievable amounts of people everywhere and restaurants at every corner.. Since I was really hungry I could not resist and entered a sushi bar near Kyoto Station. It was my first time in any Japanese restaurant, and to my surprise the staff and even the chef treated me very coldly and rudely. This is probably because my knowledge of Japanese dining and language were quite slim at the time, but still, I felt a bit shocked, and I wondered if my entire stay in Japan will be so cold and impersonal.

The next morning I quickly walked away from the noise and clatter of Kyoto for my last destination.When I sat in the waiting room at Higashi waiting for the bus to come, I met quite a few lovely people: a group of boys with whom I discussed sports and manga, kind old lady they gave me a candy and an old man who was genuinly interested in my journey. It was then that I realized that people in Japan are different from each other as people in any other country, and that can not be assessed on the basis of one bad experience.

When I arrived in Satoyama-sha, I was warmly greeted by Ryoko-san, and I was quite eager to help. And because there is always something you can help with I’ve learned how aquire hot water for showering and getting warm traditional Japanese bath without using gas at all. I was really happy to learn new things and could not wait until get to know more about traditional way of living in Japan.

That evening I met Ozeki-san and his disciples (and Hiroshi Mase-san) for the first time. We had a wonderfully delicious meal cooked by Ryoko-san and atmospere around the table was very family-like.

The day after I finally got to know what my job for most of the time will look like. At the time I arrived Ozeki-san was leading a construction of a new building for community of Miyama. The most interestin g thing was that this house was being built according to traditional japanese architecture style called timber frame house.Because such construction requires a lot of wood to be painted I gladly accepted the task of being the one who does it. The process consisted of three main steps: Apply a coat made from pine dust to coat it with oil and then polished. The final product is really view it holds. Although there was a lot of wood, it was quite rewarding work.

Over time I painted the wooden parts of the house, I had the opportunity to watch a master carpenter in action. The plaining seemed so easy and I thought that I also manage to do it, well, I could not have been more wrong. once I Ozeki-san lend one of its planes and told me to finish plaining the wood he was working on. I completely failed the task and the failure made me really appreciate ozeki-sans skills.

A few days later we were having sashimi for dinner. As I learned, if you want a good sashimi you need a sharp knife. Ozeki-san showed me how to sharpen a knife and told me to finish the sharpening. I didnt know if I would be able to sharpen it properly, and at first it didnt go very well. But as I worked, I began to notice how the knife reacts to diffrent preassures and angles and worked out a way to focus. I was very happy when Ozeki-san recognized my work.

I especially admire how naturaly are people from Satoyama-sha living. They try to use wood as much as they can instead of using gas. They also recycle very carefully. They are even using water to generate electricity with a system of their own. The food they eat is not produced by giant corporations but by farmers in the near vicinity. I think that people in Czech republic and even in other places could learn a lot and change their everyday habits so we can live with nature in harmony or as close to harmony as possible

As my stay in Satoyama-sha is almost finished I can finally see and admire how hard the Japanese villagers work. It is only thanks to devoting their lives to hard work hard that such skilled carpenters, but also farmers, chefs knife makers and masons exist in Japan. Appart from sharpening knitves, painting wood and how to live a natural life probably the most important thing I learned is that skills can be acquired almost exclusively through hard work and dedication, so I’ll try to work hard and to achieve such skills in anything I will do in my future life. I believe that everyone can learn something here in Miyama-Satoyamasha. Wheter it is a Japanese recipe, how to sharpen a knife, or simply how to love what you do.

I came with a lot of questions, but I think I’m going to be more answers. Now I know that everything I did for this trip to happen it was worth it.

( Jan, a student from Czech Republic, stayed in Satoyamasha from the end of June to the mid of July in 2014) 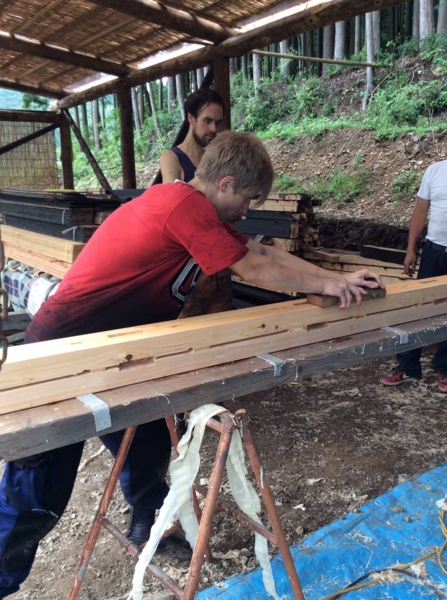