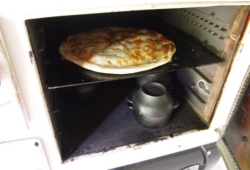 In Europe, firewood is still used on a daily basis in the form of living firewood and to fuel cooking stoves. This has made it possible to incorporate firewood into contemporary housing. Just as you would find in a fitted kitchen, the heat produced from the burning firewood has many effective cooking uses. 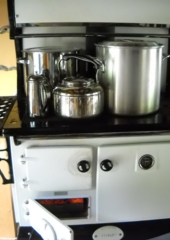 You can cook, boil and simmer and make general stir-fry dishes in the oven and on the top plate, which can also be used to make dry or ferment food.
The oven’s mechanism is comparable to bread-making techniques in European food culture. After about an hour or so the firewood should be burning hot enough to cook food on the stove, but together with the food preparation the cooking time and flame strength can be adjusted accordingly.

It might be difficult to get the hang of cooking like this at first but if you know a few tricks then everyday cooking will become very a profound thing indeed. By all means, please come and taste food which has been prepared using carefully-adjusted infrared heat.

In addition to heating food on a plate directly in the horizontally-aligned oven using wood-burning furnace, the high-temperature smoke that is produced envelops the inside of the furnace and warms it up. This kind of cooking stove does not only have cooking functions, a lot of heat is also stored and released so that it can also be used successfully as a heater.

The cooking stove that carries an air of European life, at least transforms some of the atmosphere of a room into something enjoyable. The stove has the kind of presence and appeal that will make people want to gather around it and enjoy delicious food that has been prepared there.