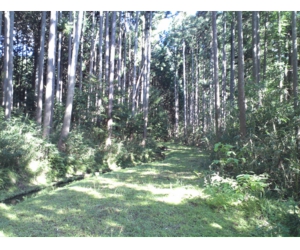 Where there is water, there is a waterway.
The intermediate mountainous areas are treasure troves bursting with resources.

Lots of rainfall and forests covering 64% of our land―In japan, there are countless numbers of rivers and irrigation canals drawing water from those rivers running thorough all over countries. Pico(very small scale)-hydroelectric generator is a device to change the flow of water into electricity. It is possible to introduce self efficient energy production anywhere there is water, which means, everywhere in Japan. 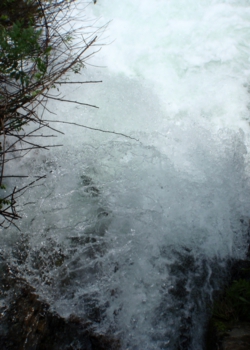 Miyama in Nantan City, Kyoto is overflowing with an abundance of water surrounded by lush greenery. The Yura River water flows purely from the original source in the forest where the fish create a dark shimmering effect as they swim.

In the old days before machinery was used, the agriculture over the water canals in the Miyajima area was made by using hand tools to dig into the bedrock and create estuaries from the Yura River to use in everyday life.

The passion of the former locals to improve their environment by creating these waterways was overwhelming when we consider that the existing bodies of water surrounding the villages were vast. Up until that point, people had been loathe to try and supplement their lifestyles in this way.

With the co-operation of the Planning and General Affairs Council in Miyajima, Satoyama-sha began to work on creating systems that could be applied to any mountainous areas by introducing small-scale hydro-electric power. 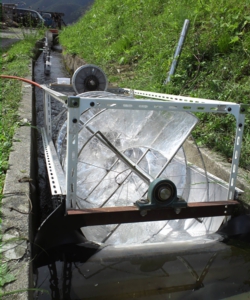 Our projects on pico hydroelectric generator has started since we found the existence of a helical water wheel. it has a lot of characteristics such as; its flexibility of the settling location that waterfalls are not necessary and only water flow is required to make it work, and its harmlessness to water flow that it does not interrupt the flow of water at all, the simple open structure which makes maintenance easy, and so on.